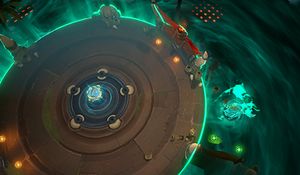 Death Vortex decreasing the area of the arena.

Death Vortex (or Sudden Death) occurs when the timer of the match runs out. A teal colored circle indicating the boundary of where you can move will appear and gradually travel towards the center of the map, limiting the area for players to move around.

Moving outside of the boundary will cause your champion to take 15 damage per second until death or upon exiting the zone.. Damage inflicted by the sudden death zone cannot be avoided under any circumstance, even with abilities that grant invincibility frames.

The Death Vortex in Battlerite Royale encloses a random portion of the battleground and will continuously get smaller at certain time frames until a winner is determined. The vortex will completely engulf the map if there are still 2 players left alive after a specific time period. The area of effect and path of the Death Vortex is indicated on the map. The damage of the Vortex will substantially get larger as the game progresses, starting from 3 damage per second to 15 damage per second.